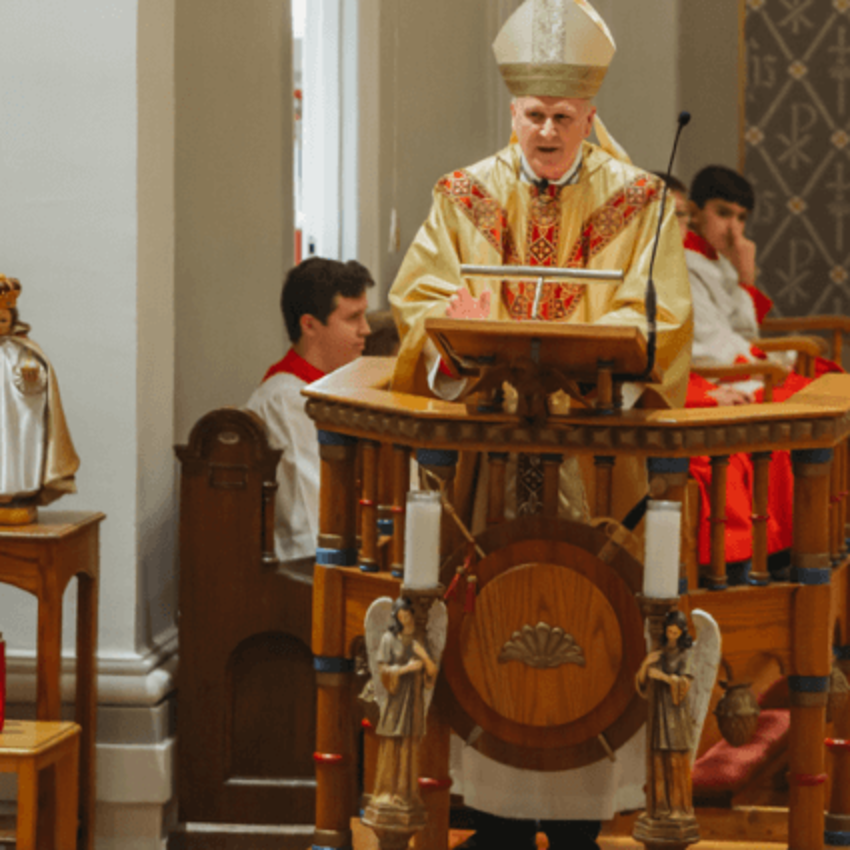 Feast of the Exaltation of the Holy Cross

In just a few weeks our nation will again hold elections. Voting is one of our greatest duties as Christian citizens, yet the subject of voting is often a most sensitive and sometimes even a combustible one, even when presented with care. No presentation on voting will likely ever find a unified reception, but this does not mean there cannot be agreement on the importance of what our vote represents. As your bishop, I humbly offer what follows as points to consider while you prepare to vote this November.

First, voting is a moral act that requires a well-formed conscience and the exercise of prudence. Our conscience does not determine what is right or wrong—God does! Our conscience tells us whether our actions are consistent with what his Law teaches is right or wrong. Therefore, forming our conscience is critically important not just for voting, but for our sanctification and salvation. For as St. John Paul II warns us, “Because of the nature of conscience, the admonition always to follow it must immediately be followed by the question of whether what our conscience is telling us is true or not. If we fail to make this necessary clarification, conscience – instead of being that holy place where God reveals to us our true good – becomes a force which is destructive of our true humanity and of all our relationships” (General Audience, August 17, 1983).

Unlike a “policy,” that is a changeable course of action, a “principle” is a fundamental truth that serves as the foundation for a system of belief or behavior. As such, voting must be guided by truth, especially the body of belief which the Church holds true. No Catholic, including those running for office, can claim to be Catholic solely on their own terms. As conscientious Catholic voters we must be guided by our moral convictions over any attachment to a personality or a political party. By voting for a candidate one is giving that person the power to decide matters that will affect the lives of individuals, the family, the Church, and the broader society.

The Heart of the Matter

Our nation’s founders touched on the essence of government’s role in the Declaration of Independence; namely to safeguard and uphold the principles of “Life, Liberty, and the pursuit of Happiness.” Government (the State) does not grant these rights, rather, it has a duty to protect what God has already bestowed upon us as inalienable rights so that all citizens can flourish.

A Catholic voter would do well to weigh a candidate’s position on each of these essential God-given rights that government has a duty to protect, beginning with the right to life. All persons of every race and nation are created in the image and likeness of God and therefore possess both dignity and a right to life from the first moment of conception. As Pope Francis personally expressed to me and the other bishops of Region IX in our recent ad limina visit with him this past January, the right to life for the unborn child is the preeminent issue because it is fundamental; without this first right, the right to life, there can be no other rights. This echoes the U.S. Bishops’ teaching that “abortion and euthanasia have become preeminent threats to human dignity because they directly attack life itself, the most fundamental human good and the condition for all the others” (Living the Gospel of Life, 5), and that, “[t]he threat of abortion remains our preeminent priority because it directly attacks life itself, because it takes place within the sanctuary of the family, and because of the number of lives destroyed” (Forming Consciences for Faithful Citizenship [FC], Introductory Letter).

Likewise, “human cloning, destructive research on human embryos, and other acts that directly violate the sanctity of human life are also intrinsically evil. These must always be opposed” (FC, 23). While protecting the right to life begins with the protection of the child in the womb, it must be extended over the entire course of a lifespan, e.g., by defending the elderly and terminally ill from euthanasia and assisted suicide, and defending other vulnerable people from attacks on life and human dignity.

In this regard, I offer the words of St. John Paul II that today are even more prophetic and more critical for guiding us in the election before us.

We are facing an enormous and dramatic clash between good and evil, death and life, the “culture of death” and the “culture of life.” We find ourselves not only “faced with” but necessarily “in the midst of” this conflict; we are all involved and we all share in it, with the inescapable responsibility of choosing to be unconditionally pro-life (Evangelium Vitae, 28; emphasis in the original).

I encourage you to study prayerfully the political platforms of the parties. Each party clearly states their position on critical life issues such as abortion, destructive research on human embryos, euthanasia and assisted suicide, the appointment of judges and Supreme Court Justices and conscience rights. Each party clearly states whether they will support or defund Planned Parenthood as well as their position regarding laws such as the Hyde Amendment that bars the use of federal funds to support abortion. Each party states the criteria they will use to nominate judges and justices. Each party states where it stands on subjects that impact the family such as how sex education, orientation and gender identity will be taught in our public schools. Each party has staked out its position on upholding or weakening religious liberty and the freedom of believers and churches to live according to religious beliefs and carry out ministries and services without coercion and the threat of penalty. Although individual candidates’ positions and actions do not always and everywhere correspond to their respective party platforms, platforms do offer a good insight into the agendas of the candidates and how they intend to use power if elected.

Again, there can be legitimate debate between parties and candidates as to the best policy to address an issue; however, this is not the same as disagreement on fundamental principles. The question prayerfully to ask ourselves then, is whether it is permissible to vote for a candidate whose positions oppose the truth of fundamental principles because one likes the candidate’s policy stance on other issues.

Finally, as voting is an important moral decision, we must also be mindful of the words of Jesus that “My kingdom does not belong to this world” (Jn 18:36) and who rejected the temptation in the desert to embrace worldly temporal power (Lk 4:5-8). Our salvation does not lie in earthly political power or party. The Church exists to evangelize and to call our fallen world to conversion, to point us to our true and lasting home which lies beyond this world.

This brief letter does not say everything that could be said, but I hope that it initiates the process that each person must undertake to prepare their conscience for the moral act of voting.

Sincerely yours in Christ,

PDF Copy of Bishop Johnston's Letter prior to the 2020 General Election
Powered by CatholicWebsite.com | Login