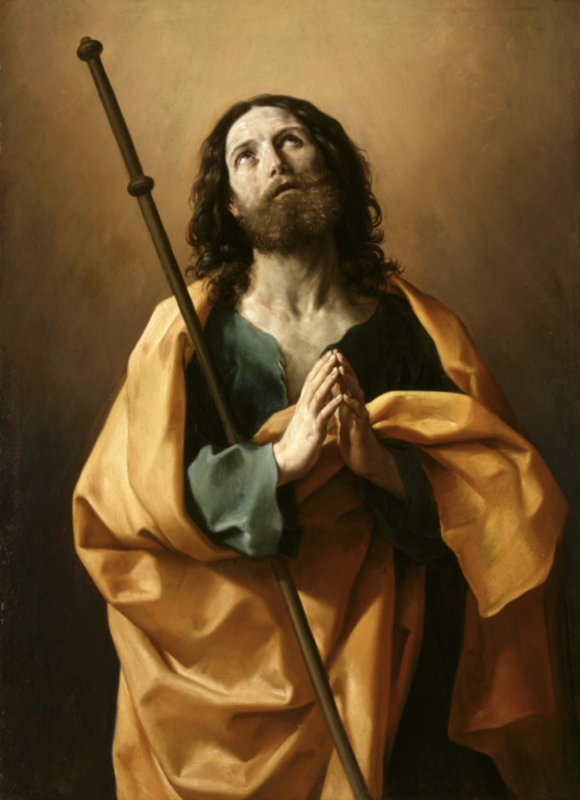 Every Catholic Church from the 4 Major Basilicas of Rome to the humblest country mission is dedicated to the memory of a Saint or in honor of some Mystery of the Faith (i.e. Holy Trinity or Blessed Sacrament, etc.).  This longstanding custom dates back to the fact that churches were originally built above the tombs of apostles, martyrs and other saints.  Now, not all churches are built above or even near such tombs, as the function of a parish church is not so much to mark a sacred historical spot, but to function as a temple constructed for worship by a local community.  Nevertheless, the practice continued of dedicating each church to a saint, thus giving the parish a heavenly patron and example.  Our Parish is dedicated to Saint James.  This is complicated by the fact that there are two Saints James, and both of them are apostles.  The architectural evidence indicates that we honor both of them - notice that there are two polychrome terra cotta sculptures on the facade of our Church - one over the north portal and one over the south flanking the Blessed Mother holding her Divine Child.  Similarly, we have statues of both Saint James the Greater and Saint James the Lesser perched on the altar retablo flanking the image of Our Lord Crucified, though these are of more recent addition.  So the question often comes, "Which Saint James is our patron?"  Well, there is no reason we cannot celebrate both - it doesn't hurt to have multiple friends in heaven!  Nevertheless, in the Tradition of the Church, St. James the lesser (son of Alphaeus) is almost always associated with St. Phillip - their feast day being May 3 - while St. James the Greater (along with John, one of the two sons of Zebedee) is usually honored singularly - his feast day being July 25, which we celebrate this weekend!

What is a patron saint and why should we feel a special connection with him?  When we think of a "patron", in general, we think of one who is an advocate, usually a protector.  Often times this is someone who is older and more advanced in experience than ourselves.  In the church we also use the terms "godparent" and "sponsor"  for someone whom we choose (or is chosen by our parents) to help us and mentor us as we grow in the Life of Discipleship.  Similarly, patron saints are either desginated (as in the titular saint of a church or a patron saint over a particular grouping of people according to trade, ethnicity, common interests, hobbies, etc.) or chosen (as in the case of our Confirmation patron saint, for example!) to be special friends, older brothers and sisters, and advocates for us in heaven, but also as we navigate our worldly existence.  It behooves us to learn much about our patron saints and to invoke thier intercession in our prayer.

Saint James - called greater, because it was thought that he was taller than Saint James, son of Alphaeus - was the son of Zebedee and Salome and the brother of John, the Beloved Disciple.  Like his brother, as well as Simon and Andrew, James was part of the family fishing business before his first encounter with Jesus and his subsequent call to discipleship and appointment as an apostle.  Following the Lord's Ascension, James traveled to Spain to share the Gospel, and to establish Churches.  Upon his return to Jerusalem, he was martyryed by King Herod (a descendant of the king of the same name who ruled during Jesus' public ministry) and his relics were transferred to Galicia - in northwest Spain to be buried at Compostella.  The early medieval city which grew up around his tomb became known as Santiago - a Spanish-Latin hybrid of "Santo Jacobo" and in the middle ages, it became a place of great pilgrimage, especially after the Holy Land became inhospitable due to Islamic belligerents.  In addition to being the titular saint of our parish, he is also, for obvious reasons, patron saint of Spain, Galicia (the region in which Santiago is located) and of fishermen.

For More information about Saint James and the Camino to Santiago please click here.

Saint Michael the Archangel, Defend us in battle...

In 1884, Pope Leo XIII, having just celebrated Mass, had a terrifying vision in which he... END_OF_DOCUMENT_TOKEN_TO_BE_REPLACED

Spiritual Motherhood and the Parish Family

A reflection on the role of women religious in parochial life

I had been at Saint James for a couple years when, sometime near January or February, Mother Joan Paul, Superior of our dear School... END_OF_DOCUMENT_TOKEN_TO_BE_REPLACED